Home
/
FOOD & FRIENDS
/
We need to be eating kid meat, but what’s the right way for it to be farmed? 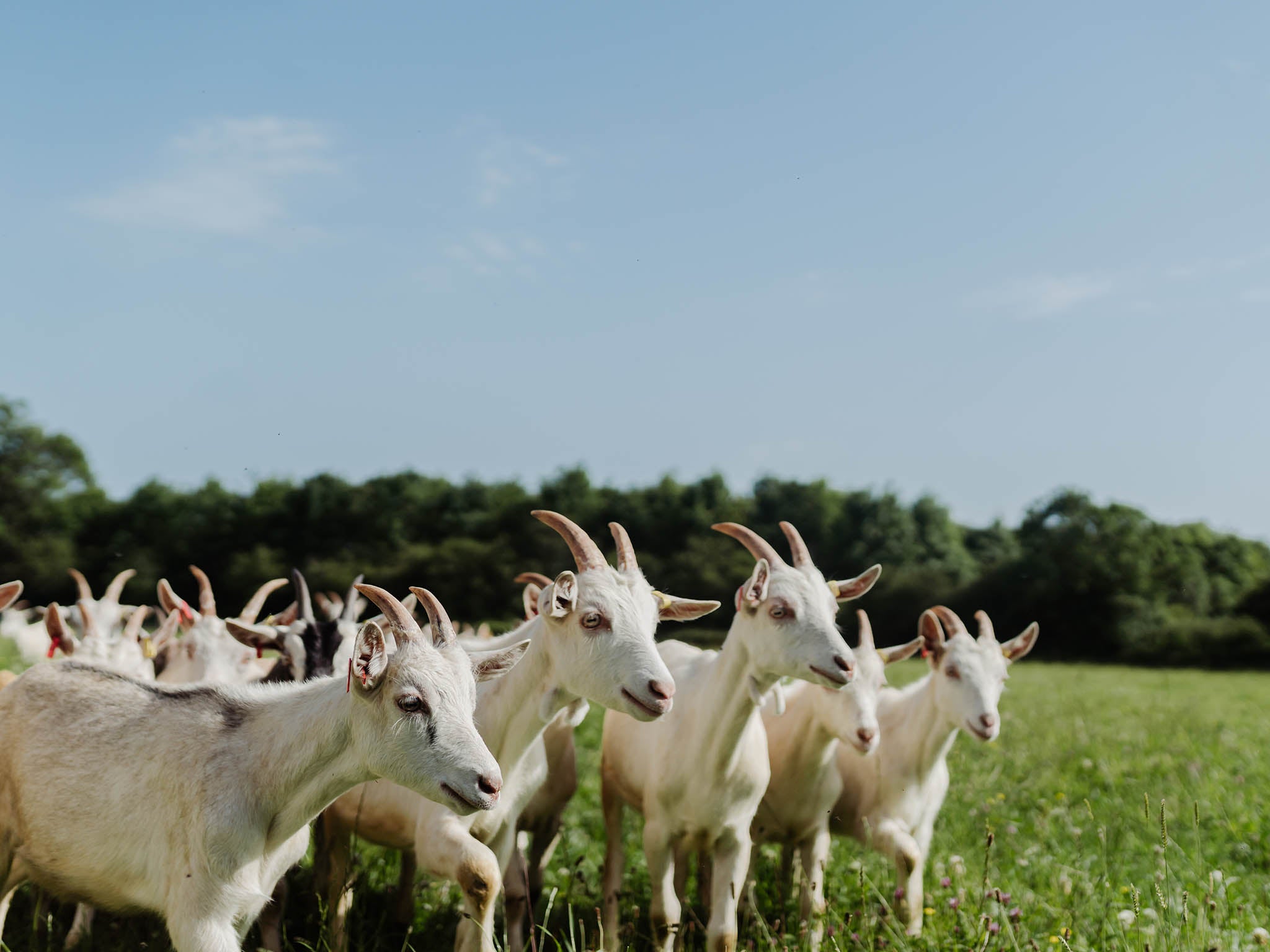 This month the likes of Ottolenghi and River Cottage will be championing a key ingredient on their menus – goat.

Sustainably minded restaurants and pubs across the UK are making goat a feature of their menus for a small but growing month-long “feastival”, Goatober.

The ambitious aims are twofold: to demonstrate how tasty this meat can be, and to bring an end to the horrifying food waste in the goat dairy system where an estimated 100,000 billy goats who don’t provide milk are often culled just after birth.

The argument is a sound one – if we’re going to consume goat dairy products we should eat some goat meat too, because it’s criminal to senselessly waste life.

There are an estimated 108,000 commercial dairy goats in the UK – and when they reproduce there’s a 50:50 chance they will produce a male, whose fate may not be to live beyond a few days.

“Waste is built into the food system but people don’t make the connection between consuming dairy products and death. I’ve talked about this every day for seven years and I still see blank faces when I mention the issue of males in a dairy system,” says James Whetlor, founder of goat meat supplier Cabrito (the Spanish word for young goat).

Whetlor and his partner, Sushi, set up Cabrito in 2012 to create a market for these young billies, starting with four goats in a field.

They now work with a network of top chefs and one of the largest commercial dairy groups in the UK, Delamare, taking just under 30 per cent of the 25,000 billy goats they produce from four of their farms.

“It’s very easy to blame the farmer for euthanising billy goats, but we’re all responsible for allowing goat dairy farming to grow with a 50 per cent mortality rate,” Whetlor says.

Although goat makes up to 60 per cent of red meat eaten worldwide, here it still has a reputation for being tough – mainly because we associate it with curries and stews made with nanny goats used for meat once they no longer provide enough milk.

Whetlor says: “The entire UK farming structure is built around wool and sheep; goat never got a look in. Goat meat is still seen as inferior – so much so that my mum won’t touch it.”

But six-month-old kid is different. It’s low in fat, high in protein and iron; taste wise it’s somewhere between lamb and venison.

So far, the key to Cabrito’s success is the support they get from some of the UK’s most respected chefs.

“Neil Rankin’s smoked goat tacos at Temper made goat cool. That made me realise the power chefs have to influence positive change in the food system. We are very lucky to get so much support and I think it reflects just how important sustainability is to this generation of chefs,” says Whetlor.

“The future of artisan production lies in restaurants. Restaurants are run by people with a passion for food. Men and women who care about provenance, ethics and quality more than they do about price.”

We also tend to be much more willing to try something new if we trust the reputation of the restaurant or person that’s cooking for us, rather than experimenting at home.

Ottolenghi’s slow-roasted goat, beluga lentils and green olive salsa is good enough to make you question everything you ever thought about this under-appreciated meat. The smell of River Cottage at Axminster’s slow-braised West Country goat and apricot tagine, served with English spelt, lentils, fresh herbs, organic yoghurt, flatbreads will have your mouth watering.

But, contrary to another common misconception, goat doesn’t have to be slow cooked. Kid chops, for example, can be particularly succulent simply rubbed with butter, seasoned with salt and pepper and griddled for a few minutes on either side.

As Whetlor says: “It’s not about penance, you should feel good about the food you’re eating.”

Whether we should be rearing goats commercially for dairy in the first place is an important consideration. The majority of goat products come from indoor systems with kid goats reared in barns and necessarily weaned on milk powder replacement.

Commercial cow dairy farms that operate in a similar way are heavily criticised by supporters of free-range farming – including myself.

Whetlor says he and his partner, both from Riverford Cottage backgrounds, had a long chat about whether they should get involved in a non-free range business before they launched Cabrito. But, he believes the indoor vs outdoor argument is not so black and white when it comes to goats.

In the introduction to his cookbook Goat, Whetlor dedicates a lot of time to the ethical issue of animal welfare.

He says: “I am emotionally a ‘free ranger’ and still believe that housing pigs, sheep and cows all year round is unnecessary and wrong, but goats are different…  In short, if you have free-range goats you are going to have more vet intervention and medication. Goats have not evolved for a British climate.”

He goes into detail about the problems with goats feet, which aren’t designed for soft, often wet ground and therefore are susceptible to infection.

His reasoning is supported by Dr David Harwood, senior vice president of the Goat Veterinary Society, who also explains: “Cows and sheep are grazing animals, they eat grass. Goats are browsing animals who will eat the likes of thistle and branches as well as grass, this means they don’t build the same levels of immunity and are highly susceptible to worms.”

In some cases Harwood says worming is needed every three weeks, so from a health and business point of view indoor farming is considered to be an acceptable option for commercial dairy farms, as long as the goats have the enrichment they need to satisfy their curious nature.

Compassion in World Farming doesn’t yet have a public policy on goats because the industry is tiny compared with the 10 million cows and 34 million sheep farmed each year in the UK.

Their research manager and former vet specialising in goat farms, Inês Adjuda, says they do have an internal one and the preference would always be for goats to be outside. If the goats are kept inside they need barrels to climb and things to hide under for mental stimulation because they are curious, social creatures who like to play from as early as one-to-two weeks old.

“I’d be lying if I said [Whetlor] and I don’t have differing views in some areas – I don’t feel quite so sanguine as he does about zero-grazing systems for goats, for instance, and I will always prefer both milk and meat from animals that have lived outside and fed on natural forage for a significant part of their lives.”

There are examples of goats raised successfully in free-range systems. These include Just Kidding and Long Meadow Goats, who also both take kids from indoor dairy systems and rear them largely outdoors on a grass-based diets, once they have been weaned.

This means the goats take longer to put on weight, so they are typically a few months older when killed for meat.

The meat tends to be leaner, with less fat than indoor bred goats.

“At the end of the day our plight is the same as Cabrito’s,” says Charlotte Mercer from Long Meadow Goats. “We want to give these kids a chance at life and to run a sustainable business.”

There’s little doubt that if we’re consuming goat dairy products, we should eat goat, too.

As the industry develops we need to ensure it doesn’t intensify so all kids reared for meat are given a life worth living.