Home
/
FOOD & FRIENDS
/
The Compton Arms: Orwellian dream or nightmare, depending on how you look at it 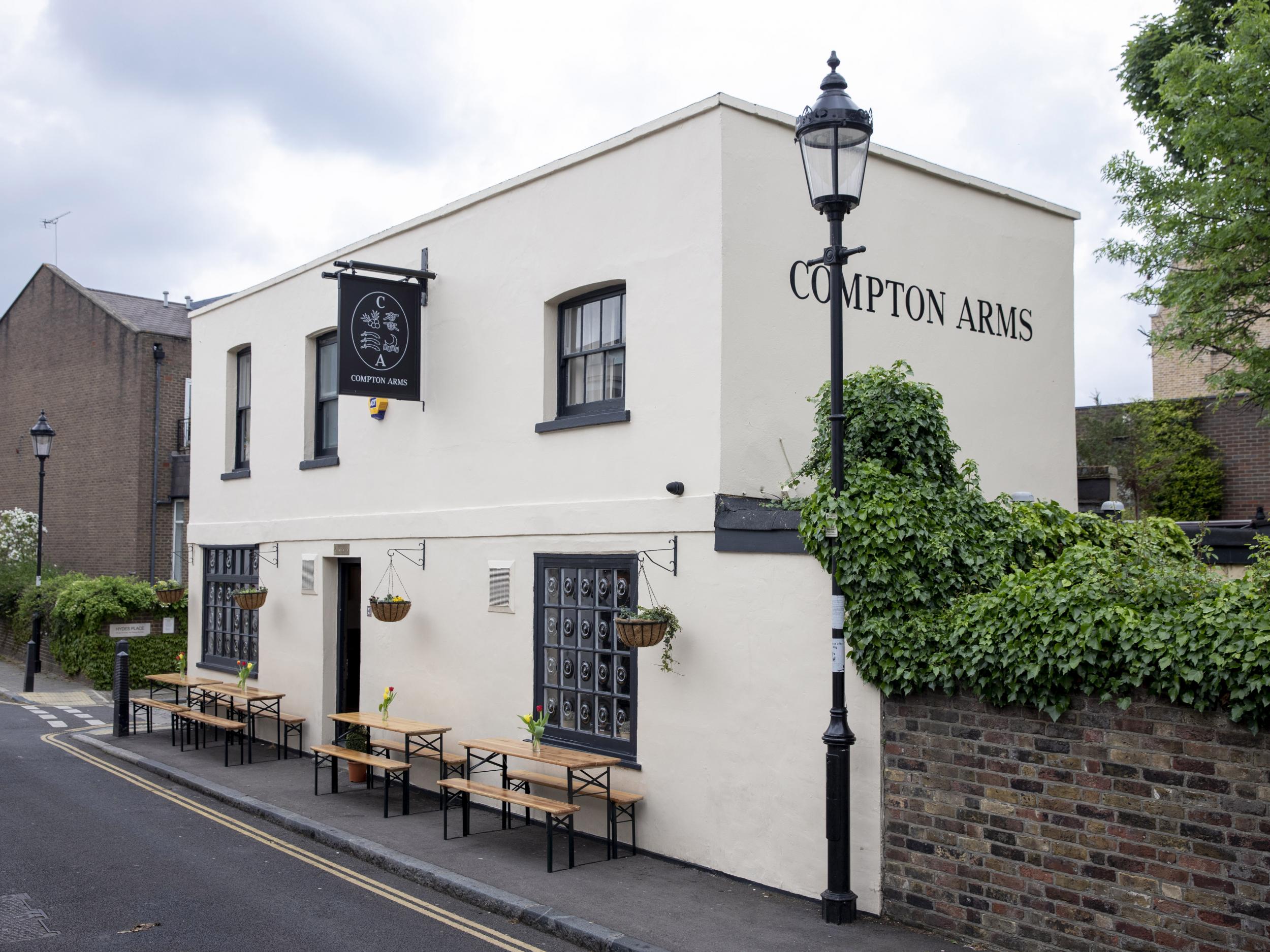 The Compton Arms is said to be one of the places George Orwell was thinking of when he wrote “The Moon Under Water”, the 1946 essay in which he describes his ideal pub. The location bears more than passing similarities. Orwell says his is found “two minutes from a bus stop, but it is on a side-street, and drunks and rowdies never seem to find their way there, even on Saturday nights”. The Compton Arms is down a quiet street across the roundabout from Highbury & Islington. Orwell insists his pub has a small garden, good beer and Victorian architectural features, and the Compton Arms, small but well formed, could make a claim on all of those.

But there, the paths diverge. It may be that the Compton Arms was once somewhere quiet, with “a clientele that consists mostly of regulars who occupy the same chair every evening and go there for conversation as much as a beer”. Perhaps in its previous incarnation it was staffed by “middle-aged women”, two with their hair dyed “quite surprising shades”, who “call everyone ‘dear’ irrespective of age or sex. (‘Dear,’ not ‘Ducky’: pubs where the barmaid calls you ‘ducky’ always have a disagreeable raffish atmosphere.)” But no longer.

The Compton Arms has had the kind of refurbishment I think Orwell would feel obliged to bemoan but which he would secretly like. This assessment is based on nothing except me projecting my own experience, extending the logic that readers of all persuasions have always taken from his work whatever they want. In its previous incarnation it was a ramshackle local of the kind, unusual in Islington these days, where when you walked in the other customers would turn to look at you like you had a swastika on your forehead and their wives in the car outside. You would ask for lager, quickly, and find what you judged to be the least offensive chair. Once you got over that it was charming enough.

Now it’s basically Studio 54. The first time I went was a weekday evening and it was standing-room only. Jeunesse informee jostled for pints of Five Points beneath the low ceiling. Another critic, infinitely better and more famous, arrived with a famous-newspaper-columnist mate. Members of David Cameron’s inner circle, who presumably now have more time for this sort of thing, mumbled over gin and tonics. God knows what it’s like at the weekend.

The new management experimented with a few different food ideas but seem to have settled, for now, on two young chefs, Jamie Allan and Ed McIlroy, who are running on a distinctly un-vegan ticket, “championing meat”. They’re calling themselves Four Legs, after Orwell’s “four legs good, two legs bad” line from Animal Farm. I think he would have approved of their menu.

“You cannot get dinner at the Moon Under Water,” he wrote, “but there is always the snack counter where you can get liver-sausage sandwiches, mussels (a speciality of the house), cheese, pickles and those large biscuits with caraway seeds in them which only seem to exist in public houses.”

The Four Legs menu is not technically a full dinner spread, but you can eat well enough that you won’t need to eat again afterwards, possibly for several days. The list changes with what’s in season, but takes elements from all over the place. Some things would please Orwell. There are mussels, served with peas and curry sauce. There are cheese curds with leeks. There are new potatoes fried in beef fat, served whole with a silky aioli, whose crisp exteriors give way to fluffy starch under fork pressure. There are other things Eric Blair probably wasn’t served in many pubs, or at Eton in 1919: chopped rump with fermented shiitake mushrooms; brown shrimp and papaya, fried quail with summer truffle.

The highlight is the cheeseburger, made with Dexter beef and priced at the distinctly non-Orwellian (or Orwellian, depending on how you see it) £10.50. Still, what a burger. If this is taking the place of the liver-sausage sandwich, it’s a powerful advert for capitalism. I thought I knew the kind of burger I liked: a roundish regular patty, reasonably loose, cooked rare enough that the juices run pink down the chin, without too much sauce and with clearly identifiable elements: cheese, pickles. Patty & Bun, basically.

This is different. The beef is pressed with a spatula into its own fat on a hot flat skillet until the edges are crisp and craggy, unevenly browned and blackened. Maximum Maillard. The cheese is applied thickly, warmed into a molten mess that mixes with a sloppy, McDonalds-ish sauce, with pickles and onions chopped into precise little cubes. This ambitious heap is held in a soft brioche from the E5 Bakehouse. I believe there is a movement against brioche buns, and I believe those people are wrong. The other critic texts me afterwards to explain these are “smash burgers” and very famous in America, which just goes to show that if you want an informed and reasonable opinion, you shouldn’t read these pieces.

I don’t know if Orwell ever ate a hamburger. (There’s a rumour that when he was 19, he ate four.) He might have thought it was a gross Americanism. He might not have liked iPhones. But he would have appreciated that people were still going out, not just to drink, but to eat simple well-cooked food and talk to each other. Besides, if you want the full Moon Under Water experience, there is a group of pubs that satisfy almost all of his criteria, and whose founder used the essay as a template: Wetherspoon’s. Unlike The Compton Arms, there is one on every corner.

Should you go? Yes
Would I go back? Yes
Could you take your parents? Yes