They’ve managed to associate the launch of their famous pumpkin spiced lattes with the beginning of autumn, and their Christmas cups with the start of the holiday season.

As corporate hype goes, it’s up there with the John Lewis Christmas advert.

The 2017 cup comes 20 years after Starbucks’ first seasonal cup and features hands holding red cups, which is “as an ode to years’ past” according to executive creative director Leanne Fremar.

They feature significant areas of white space, which are there to encourage coffee lovers to colour them in – after drinking, of course.

But it’s the accompanying animated commercial this year that may generate the most discussion, as it features a pair of women about to kiss over their festive caffeinated treat.

The ad starts with someone colouring in, with the caption: “The holidays mean something different to everyone.” 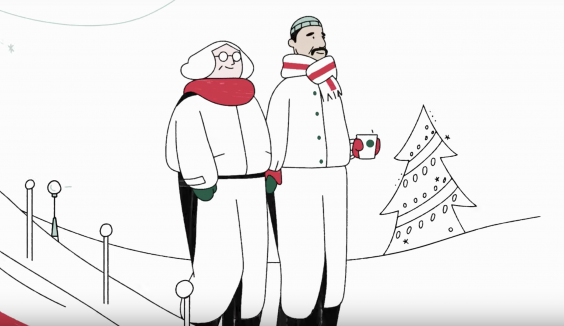 A bird (a peace-signifying dove, of course) flutters away, passing an older woman strolling through the park with her male partner, before a woman FaceTiming an elderly relative appears.

Christmas trees and wrapped gifts then appear, with people of all ages and races taking part in the festivities.

The commercial wraps up with a female couple holding a cup together and leaning in for a kiss, as fireworks explode behind them.

The ad signs off: “This season, the cup is just the beginning.”