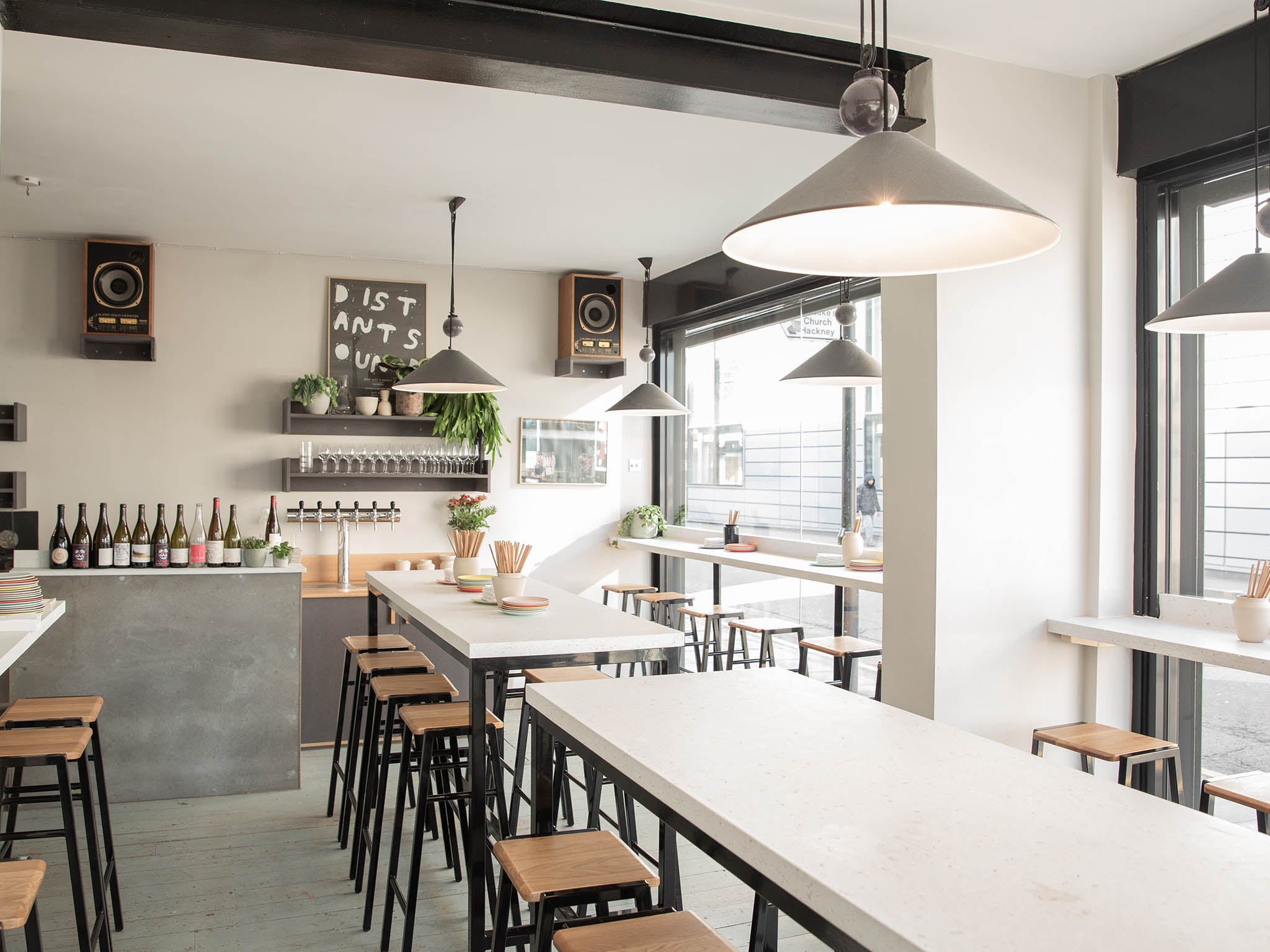 On a miserable Saturday afternoon in Hackney, with a fine piercing rain materialising from the grey heavens, Peg is a burst of bright joy, all the more so for being slightly unexpected.

The concept, a Japanese-grill-cum-neighbourhood wine bar, could easily seem like an affectation, an idea in service of itself, in a small inhospitable room.

But the people behind Peg are also responsible for P Franco, a wine shop with small plates in Clapton, and Bright, another Hackney restaurant, which together comprise an appealing Hackney micro-empire.

They know what they’re doing, and breathe life into a space that could easily have been bloodless.

The menu has 11 items on it, five under “GRILL” and six under “PLATES”. The descriptions are not effusive: “Heart”, “Thigh”, “Meatball”, “Fried Chicken”. They are brought out roughly in ascending order of fillingness. To start with, cubes of tofu, gently sweet and meltingly soft in the centre and encased in light, scorchingly hot golden tempura.

“Avahnmaha,” I say, pointing to my mouth and reaching for the water. Professional. I’ve burnt my tongue.

Luckily, some cabbage arrives. It sounds strange to say this was the most enjoyable dish of the lot, but it was up there. Pale green leaves, nearly white, came cut and torn in an upright pot, as fresh and crunchy as if our waitress had popped out back and dug them up herself.

The leaves were coated in a sesame dressing with enough nuttiness and bite to add to the cabbage without overpowering it.

Mushrooms were a bit slippery; a meatball was large and rich and mysterious in the way all good meatballs ought to be.

I feel a bit uneasy about the skewer of tiny chicken hearts, both a tasty snack and a handy metaphor for adolescence. More than other edible organs, hearts always feel like more of a betrayal, illogical as that sounds. Kidneys, livers, arses, brains, eyes, legs, eggs, fine, but what kind of a monster eats a row of hearts on a stick?

The chicken thighs are less stressful, three of them on a pair of sticks, capped with blobs of fermented jalapeno and lime that round out the flavour of the meat, which was caramelised just-so from the grill.

There is some pumpkin with miso, a quiet hit of seasonality and simple embellishment, more proof that despite Peg’s claims on being a meat grill, they are deft hands with the veg. It’s reassuring they’re not an afterthought. Look after the pumpkin and the cabbage, and the chicken will look after itself. So it proves.

Our final savoury dish, three enormous joints of fried chicken, arrive standing proudly on their plate, their deep, crisp and even coatings flecked with togarashi spices. If there is a more satisfying piece of fried chicken in Hackney, I’ve not eaten it, or at least not before 2am.

Despite its Japanese influences, this is simple, unfussy stuff, intended to go with drinks rather than be the star attraction on its own. But booze-food doesn’t get much more satisfying.

We finish with ice cream dusted in matcha, and a bill of £45 each. Peg’s a funny little place, but you can hang your hat on it.

Would I go again? Yes
Should you go? Yes
​Can you take your parents? Maybe fine with one