Home
/
FOOD & FRIENDS
/
Okie doke: Acorns are having a renaissance 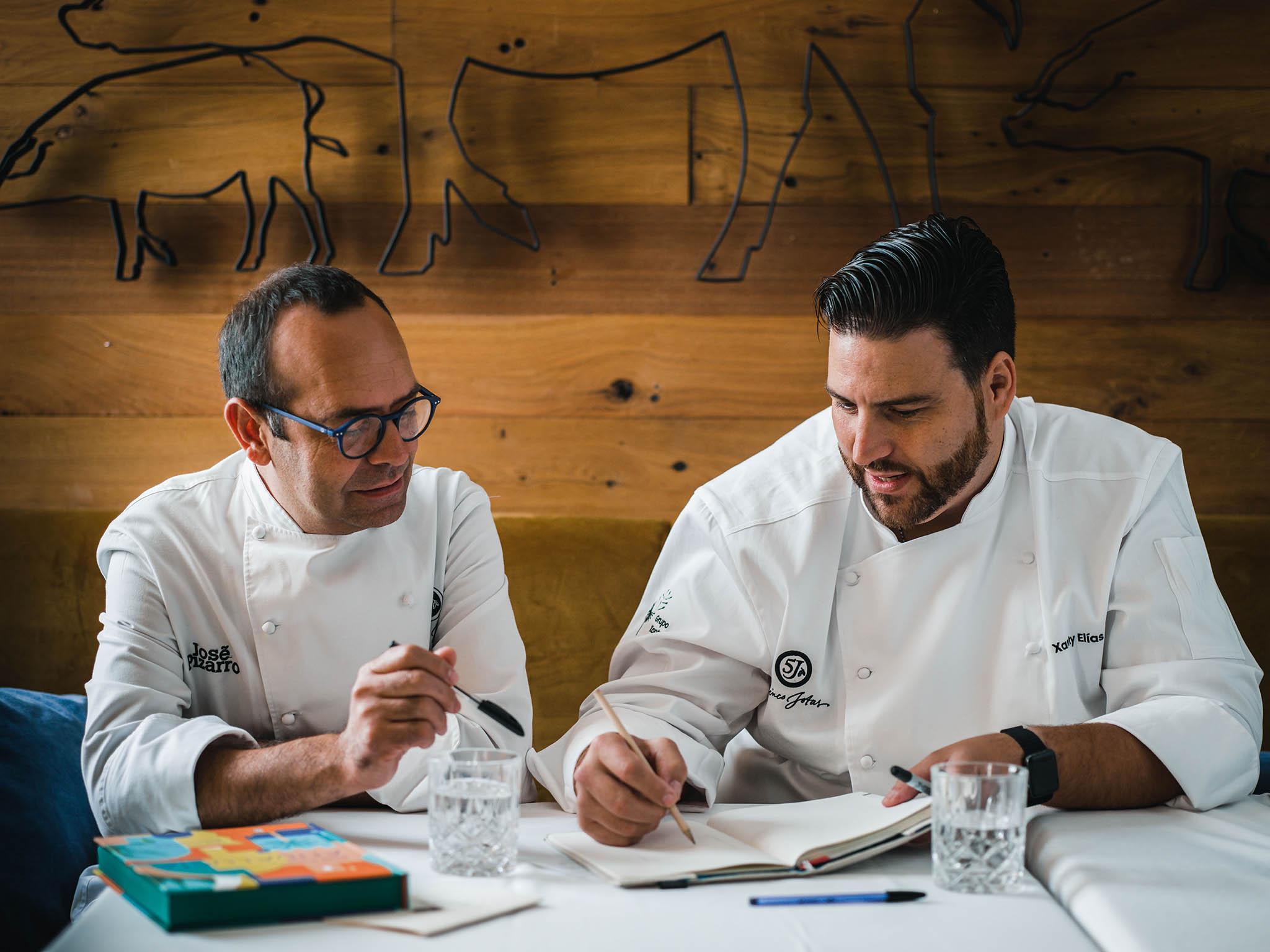 It’s not surprising that Jose Pizarro, the most high profile Spanish chef in the UK, is into acorns, considering he comes from Extremadura, the region, with neighbouring Andalucia, most noted for its wild oak forests.

“I make a rosca, a sort of honeyed doughnut, with acorn flour” he says. “The flavour’s amazing, and it’s naturally gluten free. I’m working on a version of a marron glace…”

The almost equally high profile Nieves Barragan of London’s Sabor hasn’t taken the acorn path yet, though she’s curious. “I don’t know where to get supplies of good acorns in the UK” she says.

Pizarro has solved this problem by going not to British foragers, who are certainly wise to acorn use, but to Spain, and a very upmarket source: the venerable Andalucian firm, Cinco Jotas, one of the aristocrats of Iberico ham.

As soon as the Andalucian acorn season starts – which depends on rain and is delayed this year – a package of big bullet-like acorns from the quercus ilex tree, or Mediterranean oak, of which Spain possesses half the world’s stock, will be winging its way over to London from Cinco Jotas’ factory in Jabugo.

Pizarro is in effect the UK representative of a vanguard of Spanish chefs inserting the extremely humble acorn into the top end of restaurant cooking.

It’s sparsely populated by cattle, sheep and goats, plus wild boar and deer. And most crucially, by herds of long-legged dark-skinned Iberico pigs, roaming the hills, wallowing in the stream-fed pools.

The pigs are, from mid-autumn on, tucking into the fallen acorns, which they nimbly shell and scoff, accompanied by mouthfuls of fresh grass to alleviate the astringency of the tannin in the acorns’ inner skins.

The pure acorn diet of the final months of their lives is the key to the attraction of the meat of the Iberico pigs, whose celebrated jamon de bellota is selling as never before to a world market booming with the recent jamon conversion of China, the world’s second-biggest consumer.

Driving through the dehesa with biologist Maria Castro of Cinco Jotas (one of the oldest Iberian acorn ham producers), the pigs appear out of the woods and trot over to inspect us.

They’re curious, sociable, highly mobile – roaming 14km a day – and in domestic pig terms, lucky, enjoying two years of wild freedom, rather than a couple of months of grim confinement, before slaughter.

At Cinco Jotas this comes relatively humanely after anaesthetic by carbon dioxide, though Spain is one of the last countries in Europe to permit home slaughter; the butchering of the family pig amid much drinking and offal eating by a party of family and neighbours is still a feature of Andalucian country life.

We adjourn to Cinco Jotas’ vast 1890s factory dominating the centre of the small hill town of Jabugo, where ham factories big and small dot the outskirts.

A master carver slices neat rectangles of the different cuts and points out the succulence of the thinly fat-striped meat and the unique flavour imparted by the animals’ diet. Not surprisingly, the adjoining specialist pork restaurant is called Las Bellotas (acorns).

In a freezer cabinet, I’m shown some of last year’s acorns, gathered to satisfy demand by scientific institutions as well as chefs. The quercus ilex which provides the best eating acorns, is one of three varieties of oak in the forests. Its nuts are plumper and sweeter, and no one chooses the sweetest better than the pigs. By the second year of their dehesa life, the older pigs are so expert at spotting the good stuff that the novices have to put up with rejects or berries and the chestnuts that carloads of townies from Seville come out to gather in the autumn.

South of Jabugo in the regional capital of Huelva, Xanty Elias’ restaurant, Acanthum, is the local temple of new acorn cuisine.

Fresh from a book launch with the ubiquitous Pizarro, Elias has me taste dishes from his adnHuelva menu (adn means DNA in Spanish) which aims to refine the most exquisite edible features of the region. We have deep-fried sea anemones, matured Iberico pork presa with cured egg yolk, knuckle of fallow deer, cheek and lips of corvina fish. Then, the acorns appear in the shape of a dessert of pebbles – arty Spanish chefs love pebbles – made from acorn flour and honey, mild, musty, sweetish and densely spongy. “I also use acorns salted to accompany wild boar and game” he says, “as well as chestnuts, pine nuts and carobs because they’re a vital part of our ecosystem.”

In fact, the acorn movement has been sprouting for at least a decade. Further north, a chef named Joaquina Rodriguez has been achieving some notoriety with acorn-ised traditional Asturian stews and fritters, while across the border the Portuguese Pedro Mendes’ book The Renaissance of the Acorn has been spreading for half a dozen years now, with recipes such as cream of acorns and mushrooms and rabbit with acorns.

Apart from the health and novelty aspects, impetus has been added by the movement to re-discover wild foods. Nobody has yet mustered the sadistic ingenuity to come up with the obvious idea of squirrel with acorns, thank God.

Human acorn consumption is in fact long-established. In pre-Roman Iberia, the Celts ground acorns, as did everyone from early Germans to Japanese. In 20th-century Europe, acorn flour was a poor substitute for wheat flour, and during the desperate days of the Spanish Civil War, one of the last resorts of the semi-starving, along with items such as fried orange peel, re-roast coffee grounds and soup of crusts and garlic supplemented on special occasions by an egg.

It’s not surprising, as Xanty Elias comments, that for anyone who remembers such times, acorns don’t have a temptingly gastronomic image. Though hardly anyone now does remember.

I eventually found one surviving witness near Jabugo, an octogenarian restaurant owner and living gastronomic encyclopaedia who even recalls the era when the fat of jamon was more prized than the meat. “Yes, we used to make bread from a mix of wheat and acorn flour in the post War years,” Manuel Romero says. “People had a lot of children to feed then, eight or 10 were quite common. It wasn’t bad at all. Heavy and slightly sweet…”

There are other uses for acorns. Liquor de Bellota, a sweet spirit distilled from acorns, is still drunk after meals in Andalucia. And in the UK, a company called Aecorn has started marketing a non-alcoholic aperitif in which the bitterness of acorns imparts a hint of vermouth taste.

As for the effect of all this on Spanish acorns – it’s difficult to know whether to celebrate or worry.

For one thing, the oak is yet another species under attack. Cinco Jotas is working with the University of Huelva to develop strains resistant to a parasite-borne disease known as seca which, if unchecked, could be the Dutch Elm Disease of the Spanish oaks.

And now the foodies are encroaching. It could only take an acorn recipe from Jose Pizarro in Waitrose Magazine to trigger a buying frenzy, and a spiral into the doomsday scenario of full-scale jamon famine, with devastating implications for the world of tapas.