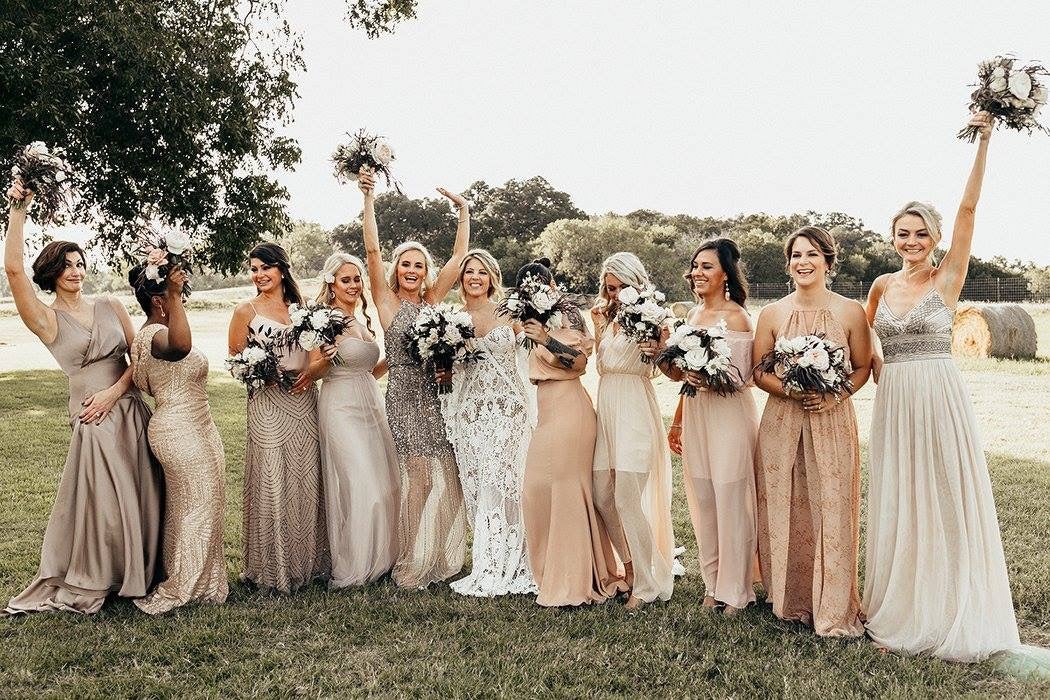 Walk through the streets of any Texan town and you’ll be greeted by restaurants selling bowls of Tex-Mex meatballs covered in glistening melted cheese, steaming BBQ pulled pork and skewers of tender beef kebabs slathered in spicy honey-glazed marinade. Here, the world of veganism is as rare as the rump steak.

Unsurprisingly, Texas isn’t the first place you’d think of in which to throw a vegan wedding. Unless, that is, you’re blogger Molly Tuttle-Tranchin who threw her vegan nuptials in the small town of Fredericburg in the Lone Star State in 2017.

“Our wedding was the first time the majority of our guests had tasted a vegan meal,” the 34-year-old blogger says. For some, that might come as a surprise. Supermarkets across the world are now lined with meat alternatives, desserts and treats and fast food chains from KFC to McDonald’s are increasingly introducing plant-based options to their menus. Celebrities including Natalie Portman, Anne Hathaway, and Miley Cyrus have all reportedly thrown vegan weddings in recent years, with Cyrus’ reportedly featuring vegan truffle mac and cheese, vegan fried chicken, and vegan biscuits with apple butter on the menu.

But the popularity of vegan wedding ceremonies isn’t a celeb-only affair. Last year, the UK welcomed its first vegan wedding package at The Green House Hotel in Bournemouth, which now offers bridal parties vegan wedding cakes and cruelty-free makeovers. “We’d noticed an increase in vegan weddings and had become so well-known among our vegan suppliers that we decided to create this Vegan Wedding Package,” Olivia O’Sullivan, the hotel’s general manager, explained. It’s a growing trend on social media too, with vegan dessert photographs seeing a 329 per cent increase on Pinterest and the hashtag #veganwedding currently appearing in over 34,000 posts.

But it’s one thing to live a vegan lifestyle and another to throw a wedding focussed on excluding as many forms of exploitation, and cruelty to, animals as possible. After all, isn’t organising your big day with wedding invitations, flowers, food, and entertainment challenging enough without sourcing vegan-friendly suppliers and dealing with disgruntled meat-eaters?

Having been a life-long vegetarian, Molly turned to veganism in October 2014 after watching the documentary Cowspiracy. “It made me realise that the dairy and meat industry aren’t two separate entities as one can’t live without the other”. That month, she launched a vegan-inspired blog to share animal-friendly food, clothes, and beauty products online with her readers to inspire them to lead more vegan lifestyles. “I only use vegan cleaning products, make-up, featherless pillows, wool-free rugs,” she says. “We even have a vegan leather sofa.”

Molly and her husband Matthew briefly dated during high school and reconnected on Tinder in their late twenties. In 2016, Matthew proposed and Molly instantly knew she wanted to have a cruelty-free wedding. “I was so excited but none of my friends or family are vegan and I’d only ever been to one vegan wedding.”

Molly says she a bit apprehensive about bringing up the subject of wanting a vegan celebration with her then non-vegan fiancé. “I became a vegan a year into us dating which I think shocked him at first.

“His parents often struggled to know what to make when we came around for dinner which I hated. I never want to feel like I’m being fussy, high maintenance or putting people out.” Fortunately, her groom was more than understanding. “As soon as we got engaged Matt said he knew I would want our wedding to be a meat and dairy-free affair. “He told me: ‘I don’t want you to be distracted by anything that might make you upset on our big day – I want it to be perfect’. It was so sweet.”

Despite her expecting some resistance, Molly wasn’t expecting so many people to take the choice of a vegan wedding as a personal affront. “It would irk me when family members would say ‘don’t you care that not everyone is vegan?’ as if we were being inconsiderate of others with our decision.

“We knew we were going to be paying £120 a head for 200 people to have all the booze they wanted and a delicious dining experience. I was convinced they wouldn’t even able to tell it was vegan food. My aim was to make sure my non-vegan guests were surprised and impressed by the possibilities of vegan food.”

With a blog bursting with advice and suggestions on how to live a vegan lifestyle, Molly admits she found sourcing eco-friendly and cruelty-free products for her big day relatively easy. “Once you get into the groove of being a vegan, it becomes second nature,” she says. “You could give me a menu and in two seconds I could have a list of what could be adapted to be vegan. It takes practice, of course, but it’s not as hard as you might think.”

When it came to finding wedding outfits, the blogger found a Ralph Lauren cotton tuxedo for her groom on eBay (“the alternatives to wool are ubiquitous”) and men’s shoes for the groomsmen from Wills Vegan Shoes in London.

As for her own outfit, Molly opted for a strapless off-white dress by Parisian-based bridal house Rue de Seine and reached out to Rebecca Mink – the founder of vegan luxury shoe brand Mink Shoes who designs footwear for celebrities like Miley Cyrus and tattoo artist Kat Von Dee. “Rebecca ended up making me a bespoke pair of wedding shoes which she made for one of Miley’s concerts,” Molly says. Meanwhile, the bride had her hair stylist and make-up artist use cruelty-free Charlotte Tilbury products.

On the day of the wedding, guests were welcomed with a small gift bag containing a variety of vegan goodies, including packets of sun cream, lip balm, vegan beef jerky, and macarons. They even had packets of vegan chickpea puffs, water in eco-friendly carton-packaged water, and their names written in non-toxic calligraphy ink on name cards made of recycled paper. “Each bag contained a note thanking our guests for coming and to remind them that the wedding was a celebration of love, not only between us but of the earth and animals,” she says.

Of course, the biggest task was choosing vegan food that would satisfy the taste buds of her majority carnivorous wedding party. With that in mind, Molly and her husband decided to take their non-vegan in-laws along to their menu tastings. “We wanted to make sure that we had approval across the board from meat-eaters which would hopefully please everyone at the wedding,” she says. More surprisingly, however, the couple reached out to non-vegan catering companies.

“Sometimes, vegan catering restaurants can be so excited by the fact that their food is vegan that they lose sight of whether it really can compete with non-vegan food,” Molly explains. “I like it when I can work with restaurants who do both vegan and non-vegan food as they can often have a more discerning attitude. I really wanted the meal to be delicious, filling, and have a lot of options so people didn’t think the meal was lacking.”

Finding a vegan-friendly wedding venue for their nuptials proved more challenging than the couple expected. “We turned up at a few and noticed that they had animals like horses and cows on site,” she explains. “We had to ask several places whether the animals were going to be sold and slaughtered.” In the end, Molly and Matthew asked the owners of their wedding venue to sign a contract promising them that all animals on the grounds were going to be kept and not sold for profit. “It immediately made me feel at ease with having our wedding there,” she admits.

“People like to poke holes in vegan weddings and suggest that they’re not able to experience everything they would usually at a typical wedding, but it’s not the case,” Molly says. “Texans were coming up to us during the wedding breakfast to say that they had been scared to eat vegan and that they thought they were going to starve but found the meal surprisingly delicious.”

Reflecting on her wedding, Molly says that it cemented her belief that you should never feel you have to explain yourself to anybody for your life choices.

“If you’re planning a vegan wedding, whether people think it’s fair or not, people are going to be looking for things lacking in the food and experience,” the blogger explains, warning brides and grooms that they should expect to come across their fair share of vegan naysayers, especially among older guests.

“They might make comments like ‘well I guess I’ll have to order a cheeseburger to my room after the reception’,” Molly jokes. That said, she says it’s important to not worry about pleasing the people who are determined to be negative about the experience, and to not take their comments personally.

“A lot of guests who were negative about our wedding ended up being the ones who were drunkenly praising the vegan Mac n cheese and Tofu fried steak,” she says.

That said, the blogger adds that it’s important to recognise that everything at a vegan wedding is going to be the same as it would be at a non-vegan wedding, as long “as you take care in sourcing what you want”.

“I made sure to be careful to make it an amazing experience for everyone and paid extra detail to make sure there would be nothing to nit-pick,” Molly explains. From her own experience, she advises couples to go to several food tastings when deciding on which caterers they want to use for a rehearsal dinner and/or wedding.

“I know it can be quite a big financial investment (they typically will charge you around £80 for a tasting) but it’s worth it,” she says. “We were shocked at how much we didn’t like the food when we expected to from certain caterers, and vice versa.”

“You can’t presume everyone loves a vegan burger – you need to have enough options so that no one can say that something was missing from your big day or they left dissatisfied.

“We even heard some people went vegan after the wedding. We clearly showed them that a non-meat and dairy meal can be just as tasty and filling as non-vegan food.