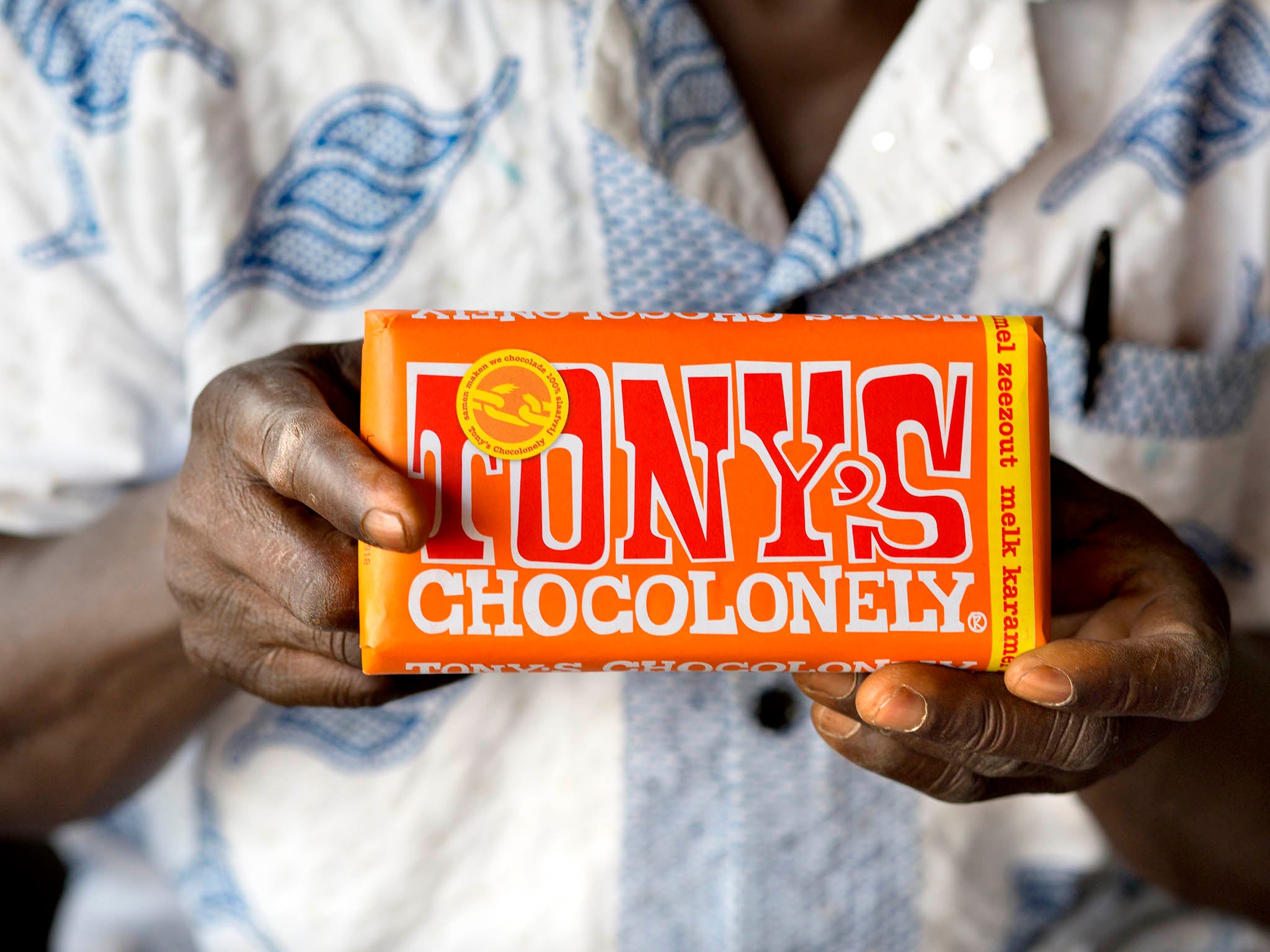 In 2005, Dutch journalist Teun van de Keuken took himself to the police and asked to be arrested, hired a lawyer to help send him to jail, and asked a judge to convict him of driving child slavery.

He even went to West Africa and brought back a former child slave to testify against him.

Much to his disappointment the judge wouldn’t convict van de Keuken, because his crime was eating a chocolate bar.

Then van de Keuken decided he’d try to stop child slavery from the inside instead, and set up a chocolate company – Tony’s Chocolonely​ – dedicated to eradicating it from West Africa, where 70 per cent of the world’s cocoa beans come from.

In the 14 years since, van de Keuken has stepped away from Tony’s Chocalonely, but the brand is now the Netherlands’ favourite chocolate company, and enjoys 20 per cent of the market share.

This year it has started to have impact beyond its own slave-free supply chain by working with Albert Heijn, the Netherlands’ largest supermarket, to make its own-brand chocolate slave-free in a project enabled by Barry Callebaut, one of the world’s largest chocolate manufacturers.

Tony’s is now expanding to UK supermarkets, and hopes to shake up the chocolate industry here, too – with a new office of just four employees.

It’s late February, and Beltman, who has been Tony’s majority shareholder since 2011, has flown in from the Netherlands for the brand’s UK launch, which will, for the next few weeks, entice people off the streets and into a Soho venue under the guise of free chocolate.

The punters, who obviously never listened to their parents’ advice to not take chocolate from strangers, are then shown a video about child slavery in West Africa and told there is no such thing as free chocolate.

It’s a long way from the press-stunt highs of founder van de Keuken, but the brand has been consistent in putting the messaging before the chocolate.

“We have to prove to our competition and to governments that you can make tasty chocolate and be commercially successful while eradicating slavery from the value chain. And sometimes this goes very much in the opposite direction of our ideas of commercial success,” Jan Beltman says as he perches on a bright red sofa, facing a display of Tony’s chocolate bars piled high in colour-coordinated towers and hanging from the roof.

“We choose to inspire other brands to do slave free chocolate as well. We opened up and said that, if you want to make slave-free chocolate, we’re here to help. Maybe that’s not the best choice commercially, but it helps the purpose.”

The first part of Tony’s plan to change the UK chocolate industry is to drive awareness, then lead by example, says Ben Greensmith, Tony’s UK Country manager. It does this by sharing the details of its supply chain under its Tony’s Open Chain platform, where companies can access everything that’s required to eliminate child slavery from their supply chain.

Tony’s has five main principles: being able to trace where all its ingredients come from, paying higher prices to farmers, improving farmers’ productivity and encouraging them to adopt modern practices and diversify their crops, and investing in long-term commitment and farm cooperatives to empower farmers to work together.

The organisation has five cooperatives in the Ivory Coast and Ghana, with whom it works to ensure its cocoa is segregated at every point in the supply chain to ensure it’s as close to slave-free as possible. Greensmith is keen to point out that Tony’s doesn’t say it’s perfect, and it still does occasionally find issues, such as children carrying things they shouldn’t, or not wearing the right clothing.

Tony’s pays farmers a living wage by taking into consideration the size of their family and their farm, and adding a “Tony’s premium” on top. This is the most crucial part, because it’s widely established that child slavery is driven by low wages and poverty, says Dan Morey, head of commercial partnerships at Fairtrade.

“The majority of cocoa farmers are unable to earn anything approaching a living wage and aren’t able to feed their families. Children can’t go to school because they would need to work for a month to buy that child’s school uniform,” he says. “The economic conditions lead to this child slavery because this is the ‘sensible’ choice for families.”

The price of cocoa on the world market is volatile, and in recent years has dipped as much as 40 per cent. When this happens, farmers usually bear the brunt, Greensmith says.

“The middleman made more while farmers made less,” he says. “When this happened in Holland we ended up paying more to pay the difference, because we’d never want to profit from a drop in price of cocoa – and we want all companies to do that.”

The largest chocolate manufacturers, however, seem more interested in keeping the price of cocoa down, he adds, and Tony’s wants to show them that another way is not only possible, but profitable. And this isn’t the only part of the market that needs to change, Greensmith adds, because UK retailers heavily promote this chocolate, meaning UK consumers are accustomed to paying so little for it.

Overcoming all of this will be tough, Greensmith concedes, but he argues there is no better time than the present – particularly because there’s such an appetite, particularly among younger generations for knowing exactly what their money is being spent on. While consumers are generally used to paying low prices for chocolate, that doesn’t mean they won’t pay more, Greensmith argues.

“Ethics and fair trade isn’t always at the top of shoppers’ minds, but we’ve seen how this understanding can grow. If you can get that understanding there, consumers really do want to act on it.

“They have a huge part to play in eradicating child slavery, but can only do this if the options are there. We want people to accept that chocolate is a luxury, and to pay more for it.”

However, Jan Beltman, who was previously responsible for Innocent Drinks in the Netherlands, is concerned that consumer awareness isn’t where it needs to be.

“People don’t have a connection between brands on the shelf and the value chain behind it,” he says.

“I’ve seen families living in the Ivory Coast and there’s no way I’d buy chocolate that comes from an undefined source. If you want to ride a bike you go to a bike shop, not someone in the park who stole a bike. With chocolate, stealing a bike is a smaller criminal act than having children working on a coca farm.”

Tony’s ambitions are commendable, but Morey takes a more realistic approach to the impact Tony’s can have in the UK.

“We’re excited to be welcoming Tony’s to the UK, and it’s joining numerous existing brands with a similar stance, including Divine and Ben and Jerry’s,” he says.

But, he argues that child slavery is endemic across the sector, and it’s not in one company’s grasp to address poverty alone.

“Tony’s is part of a gradual increase in pressure being put on business, and awareness among consumers of these issues,” he says.

Morey says this will eventually lead to a tipping point where ethical practice becomes necessary for businesses, whether it becomes law, like the Modern Slavery Act, or whether there becomes a requirement to address these things to have license to operate.

“But we have to be realistic about how much one brand like Tony’s can do. It’s up to governments, businesses and supply chain partners – there are so many actors that need to be brought together, most importantly, the cocoa farmers themselves, who rarely have a voice here,” Morey adds.

Greensmith concedes that the government needs to create the right environment for businesses to change.

“At the moment there is little pressure on business to demonstrate that they’re paying good wages to cocoa farmers,” he says.

In the absence of such change, Tony’s is taking on this role. The brand has invited big chocolate companies to its launch in London and is “working with them in parts and having conversations at different levels,” according to Greensmith. While he didn’t specify which companies these were, the biggest operators of chocolate in the UK include Nestle, Mars and Modelez.

“They know things need to change, and we would welcome more conversation,” he says.

The most striking thing about a Tony’s bar is its pieces, which are divided into a pattern instead of uniform squares. The inside of the packaging explains that the money made from cocoa is unevenly divided, before letting the consumer eat the metaphor.

“Chocolate doesn’t have a nutritional purpose, it’s just something we enjoy. But when it comes from a source you can’t be proud of, you can’t enjoy it,” Jan Beltman says. “It doesn’t make sense that there are 1.3 million children doing illegal work in cocoa for a product we just want to enjoy.”

Nestle, Mars and Modelez have been approached for comment.