Home
/
FOOD & FRIENDS
/
Do Skittles actually all taste the same? We did a blind test to find out

The internet is abuzz with debate over whether Skittles actually have different flavours or whether we’re merely being fooled by their colour and scent.

We all have our favourites when it comes to tasting the rainbow – any sane person would of course rank the colours from best to worst as follows: red, green, purple, orange, yellow.

But according to some scientists, it’s all one big trick by the confectioners.

Because it’s cheaper to make sweets with different colours and scents than actual flavours, we might be being mugged off.

Scientists are currently looking into the phenomenon, trying to find out how the senses work together and affect one another.

While it’s no secret smell plays a big part in taste – isn’t it the worst when you have a cold and everything tastes disappointingly bland? – less research has been done into appearance.

The trouble is, we’ve been conditioned to associate colours with tastes. Yellow is always lemon, green is apple or lime, red is strawberry or raspberry, purple is usually blackcurrant and orange is, of course, orange.

When Professor Charles Spence, author of Gastrophysics: The New Science of Eatingconducted an experiment asking participants to guess the flavours of various fruit-flavoured clear liquids, they all guessed correctly.

But once the liquids were given colours that didn’t correspond to their flavours, the participants didn’t score so well. People thought the grape-coloured liquid tasted of grape, even when it was in fact orange, for example.

And this is what happens with Skittles.

“The Skittles people, being much smarter than most of us, recognised that it is cheaper to make things smell and look different than it is to make them actually taste different,” Brandeis University neuropsychologist and taste expert Don Katz told NPR.

“So, Skittles have different fragrances and different colours – but they all taste exactly the same.”

Could this really be the case? We conducted a blind experiment to put the theory to the test.

Makeshift blindfold donned and nose held, I picked up five different Skittles one at a time (little did I know, I would pick up one of each colour).

My first realisation? There is so little flavour left to assess when you hold your nose?

And my second? Wow I can’t breathe.

Despite the fact that there was less flavour without scent, I was convinced I’d got all five correct.

This was, however, not the case. 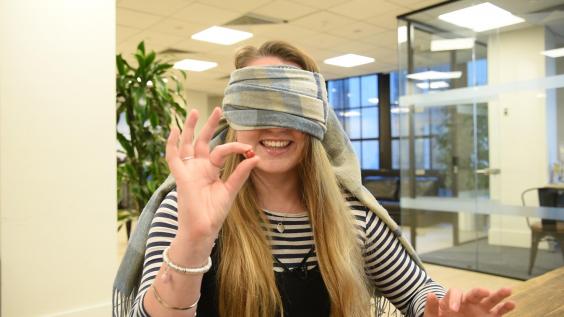 It looks red but does it taste red?

I was shocked to discover I’d actually only scored three out of five, mistaking the red Skittle for purple and vice versa.

That said, there was definite taste variation between the different colours, even if a lot of it does come down to scent and colour.

I still tasted the rainbow. Even if only part of it.