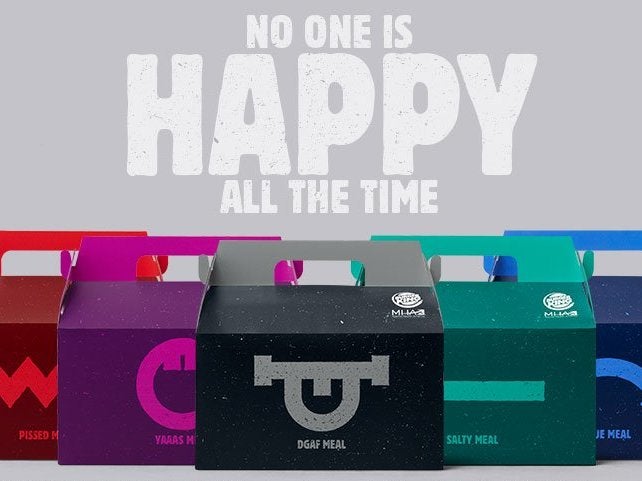 Burger King has launched a new range of meals which match a customer’s food selection to their temperament.

Dubbed “Real Meals”, the aim of the campaign is to demonstrate that “no one is happy all the time, and that’s OK”, the fast food chain stated on social media.

The meals featured in the range include a Pissed Meal, a Blue Meal, a Salty Meal, a YAAAS Meal and a DGAF (don’t give a f**k) Meal.

“Feeling blue? Salty? Pissed? YAAAS? Or simply like you DGAF? That’s ok. No one is happy all the time,” the eatery wrote on Instagram.

The meals can be ordered from selected Burger King restaurants in the US when buying a Whopper meal, which includes a flame-grilled Whopper sandwich, chips and a drink.

The “Real Meals” have been created in collaboration with Mental Health America (MHA), in order to shine a light on the importance of mental health issues.

“While not everyone would think about pairing fast food and mental health, MHA believes in elevating the conversation in all communities in order to address mental illness,” said Paul Gionfriddo, president and CEO of the mental health organisation.

“By using its internationally-known reputation to discuss the importance of mental health, Burger King is bringing much-needed awareness to this important and critical discussion – and letting its customers know that is OK to not be OK.”

The video shows several individuals experiencing various situations that heighten their emotions, such as being verbally abused at school and quitting a job.

“Not everybody wakes up happy. Sometimes you feel sad, scared, crappy. All I ask is that you let me feel my way,” one of the actors says in the film.