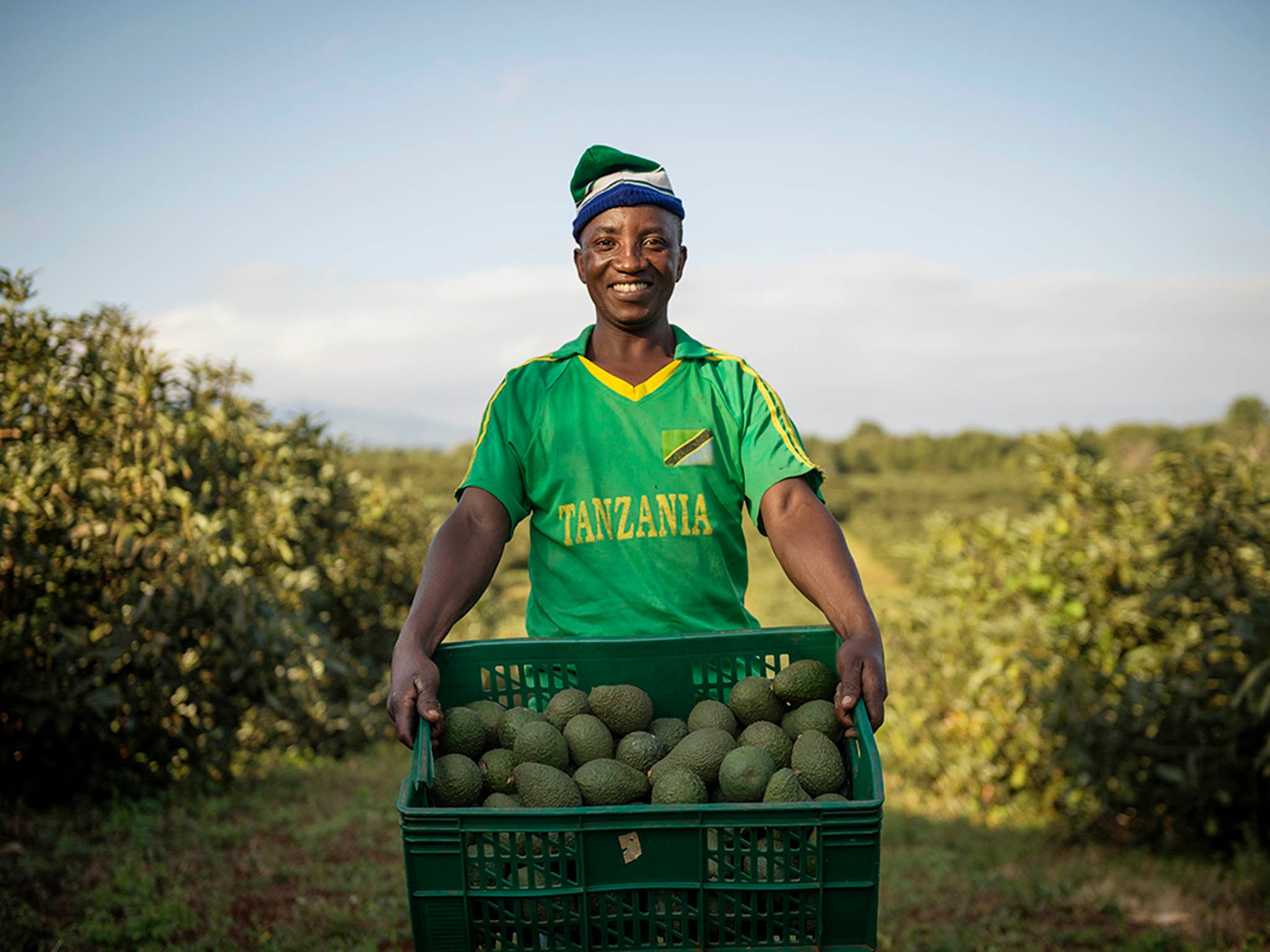 On the western flank of Kilimanjaro, a dirt track leads to a once esteemed German coffee farm.

The mountain’s slopes in northern Tanzania have long been renowned for quality arabica coffee beans, but here commercial coffee hasn’t been produced in a long time.

Instead tens of thousands of pear-shaped avocados are ripening under the equatorial sun.

Africado is one of Tanzania’s first commercial avocado farms and the first to export its fruits abroad, including to the UK, the Netherlands and France.

Here, production is rising fast and with the European market increasingly saturated with South American avocados, China could become its next export frontier.

For hundreds of local people, avocado farming has replaced the coffee farms as a source of livelihood.

British farmer, James Parsons, spotted the potential for growing avocados in this high-altitude region more than a decade ago.

In 2007, after 15 years of working on a large coffee farm in neighbouring Kenya, Parsons set out to convert the former German coffee farm into an avocado farm.

The 137-hectare site had long fallen into disrepair. Overgrown shrubs and bushes had spread across the land, surviving coffee trees were diseased and the roof of the old farmhouse was full of holes.

Years of price volatility, nationalisation in the 1970s and poor management from local co-operatives had led to the farm’s collapse.

“It was difficult at the beginning,” Parsons says, walking among the rows of mature hass-variety avocado trees.

“This was a coffee growing area and the cooperative from which I rented the land wanted me to grow coffee. They didn’t understand why I wanted to do avocados.

“Local people thought that I wanted to grow local avocados,” he says, referring to the variety of large avocados with big stones that are sold cheaply on street corners across the country.

“They didn’t see any value in doing that. For them, avocados were pig and dog food.”

With time, and as the farm started to recruit workers, local people realised that these new sought-after avocado varieties could bring jobs and money to the area.

Tanzania’s Kilimanjaro region is one of the country’s largest sources of freshwater. “If you can store it, there is heaps of water here,” Parsons says.

On the farm, large lined reservoirs store flood water from rivers and the farm buildings’ gutters during the rainy season. In the seven months of dry season, pipes channel the water to micro-sprinklers installed at the root of every tree – an irrigation technique which reduces water wastage.

Improving the quality of the soil through mulching techniques has also played a crucial part in enabling the farm to reduce its water footprint and its use of fertilisers.

With efforts to use less water, also comes efforts to reduce waste. Every year, around 20 per cent of the avocado production unsuitable for exports is sent to Kenya to be processed into oil that’s often used for cosmetics. The rest is packaged on site and will reach consumers’ plates about 30 days after being picked.

In 2018, Africado exported 3,000 tons of avocados to Europe – about half of Tanzania’s production – including to the shelves of Tesco, Sainsbury’s, Waitrose and Ocado in the UK.

As the former German farm is quickly reaching peak production, Parsons has started a second avocado farm – doubling Africado’s production capacity thanks to a £3.5m loan from the Finnish and Norwegian development funds, AgDevCo, a company funded by the UK’s Department for International Development that invests in African agribusiness.

“We should be able to reach more than 6,000 tons of exports,” Parsons says.

The expansion of the second farm has also seen Africado increase its workforce with 350 permanent staff and up to 400 seasonal recruits working across both farms. About 60 per cent of all employees are women.

“Most people employed on the farm have never had a formal job or a regular salary before,” Parsons explains, adding that most depend on the informal economy and harvests of maize and bananas, grown on small plots of land, for their livelihood.

“Salaries have completely changed the local area. People can go home and bring their salaries back to their families. This means people here really value their job,” he says.

The new farm will grow gem avocados, a variety which has a tough skin with gold flecks, as well as a rich flavour that comes from staying on the tree for longer, and is anticipated to rival hass avocados on the global market.

With a different harvest period to the hass type, growing gem avocados will enable the farm to extend its production season from the current four months to eight months a year — retaining its seasonal staff for longer.

In 2010, Africado launched a small-holder scheme selling local people subsidised seedling trees, from the farm, with a guarantee that it will buy their production in return.

Each farmer is trained on how to improve soil quality using mulching techniques, how to develop a basic irrigation system and pruning the trees to increase production.

“We train farmers to change their mindset about farming,” small-holder manager Festus Nkuru says. “Many of them don’t know about the importance of pruning and mulching. In turn, we encourage them to train their neighbours, relatives and friends.”

Nkuru believes the scheme’s success is proof that local people have been convinced of the value of growing avocados. “Now everyone wants to grow avocados and local people have even started eating them,” he says.

Additional income from the scheme is allowing farmers to pay for a better education for their children, according to Nkuru. “There is also a lot more money circulating in the area which means that people are buying more food and more money is being spent on health,” he adds.

With farmers having to wait seven years for their avocado trees to produce at full capacity, Parsons hopes the scheme will continue to grow the farm’s overall production.

For him, this is “one of the most rewarding parts of the job”.